Home Culture The insect in the pot: my interview with Entonote, on Pop Economy...

In Italy, we recently started talking about edibles insects. Giulia & Giulia, a young biologist and a food stylist, the girls of the Associaton Entonote, are certainly one of the most interesting voices to listen to in this regard. That’s why I interviewed them for Pop Economy TV, the new TV channel of Francesco Specchia. 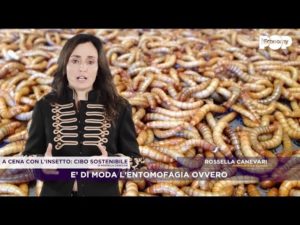 The first time I saw a street-food situation consisting of insects (not eaten, only seen) was the distant 1997 and I was in Thailand. Deep fried crickets and some locusts sold for a few bahts at sunset, near the beach. It was the first time I saw humans eating insects, I was still a teenager, I was in Puket…and this had caused me terrible decompensation. I would say a series of retching, overcoming the initial shock.

In the years to follow up to today, I have traveled often and with passion in Asia, my country of the heart. Cambodia, Vietnam, Thailand, China, Tibet, Singapore, Malaysia, Indonesia. Among the many things that this generous continent can teach, I learned or maybe it’s better to say, I got used to considering insects differently.

IN ITALY THE INSECTS ARE still a taboo. 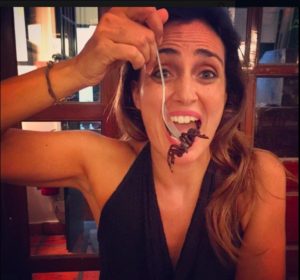 I grew up with the terror of spiders, dark and hairy creatures that live in darkness, weave canvases to frame the prey and when they appear in the corners of our aseptic homes, they generate disgust and confusion. My grandmother defended herself from the neat rows of small industrious ants (nothing to do with the enormous ants of the Amazon) that appeared from the cracks in the kitchen tiles, killing them with lemon. We do not want to talk about those little worms that come from the flour and they turned into brown butterflies that swirled around the kitchen…they were a sin, a horrible sign of degradation that caused always to my father, feeling of disgust.

In Cambodia, instead, the population have learned to eat the spiders, but not the harmless and nice ones with the small body and the long legs, the tarantulas, during the terrible period of Pol Pot. There was no food, the majority of the population was forced to work harshly in the prison camps. To survive, they started to eat what nature has put at their disposal: spiders, snakes, ants and yes, even cockroaches (I know! This is the harder to digest in every sense!). In this way, some have survived the Khmer Rouge genocide. Fortunately, Nowadays things are different but in Cambodia, even in Phnon Pehn not only in the inland villages, it is possible to dine in local restaurants that serve insects. 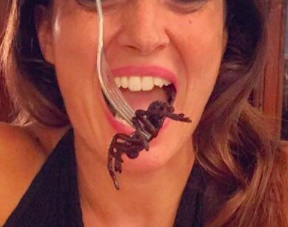 So four years ago I tried them for the first time, the fried crickets, then the ants and finally (it took me about an hour to eat it), a fried tarantula. Moral? Today I look at the insects differently, I do not see them as an unbeatable taboo but rather, I am aware that they are a sustainable resource rich in nutritional values, as well as having a low environmental impact.

Talking about entomophagy today means talking about a sustainable diet that if developed in an intelligent and (non-intensive) way, has a low environmental impact. Food insects could contribute to reducing gas emissions and decreasing water consumption in food production.

Wait…wait a minute…and the taste? Honestly, I think it’s just a matter of habits, of what we are taught. A cultural heritage within which we were born and grown, like thinking that pasta and pizza are the best. Let’s be clear: pizza and pasta, just to mention some of the most popular dishes in Italy and the world, they are the best and I will continue to eat them but not for this, I will not supplement my diet with insects.

Currently, edible food insects on the market are over 1,900. About 2 billion people regularly eat insects worldwide, as part of their diet. Which? Beetles, caterpillars and even bees, wasps and ants. If you have never tried them, I recommend you do it, now on Amazon there are also snacks of crickets for the happy hour, like chips. One leads to another. Try it with a barricaded white wine like a Riesling, a Traminer or maybe with a Pinot Noire…and Cheers!

The Italian cuisine, becomes part of the UNESCO World Heritage? The...